This unit is a dream for the technologically-impaired, get-confused-with-too-many-pans beginner cook. In this Tiger JBV-A10U review, we take a look at this multi-functional unit and weigh the pros and cons of having one unit that does all your cooking with only a push of a button. 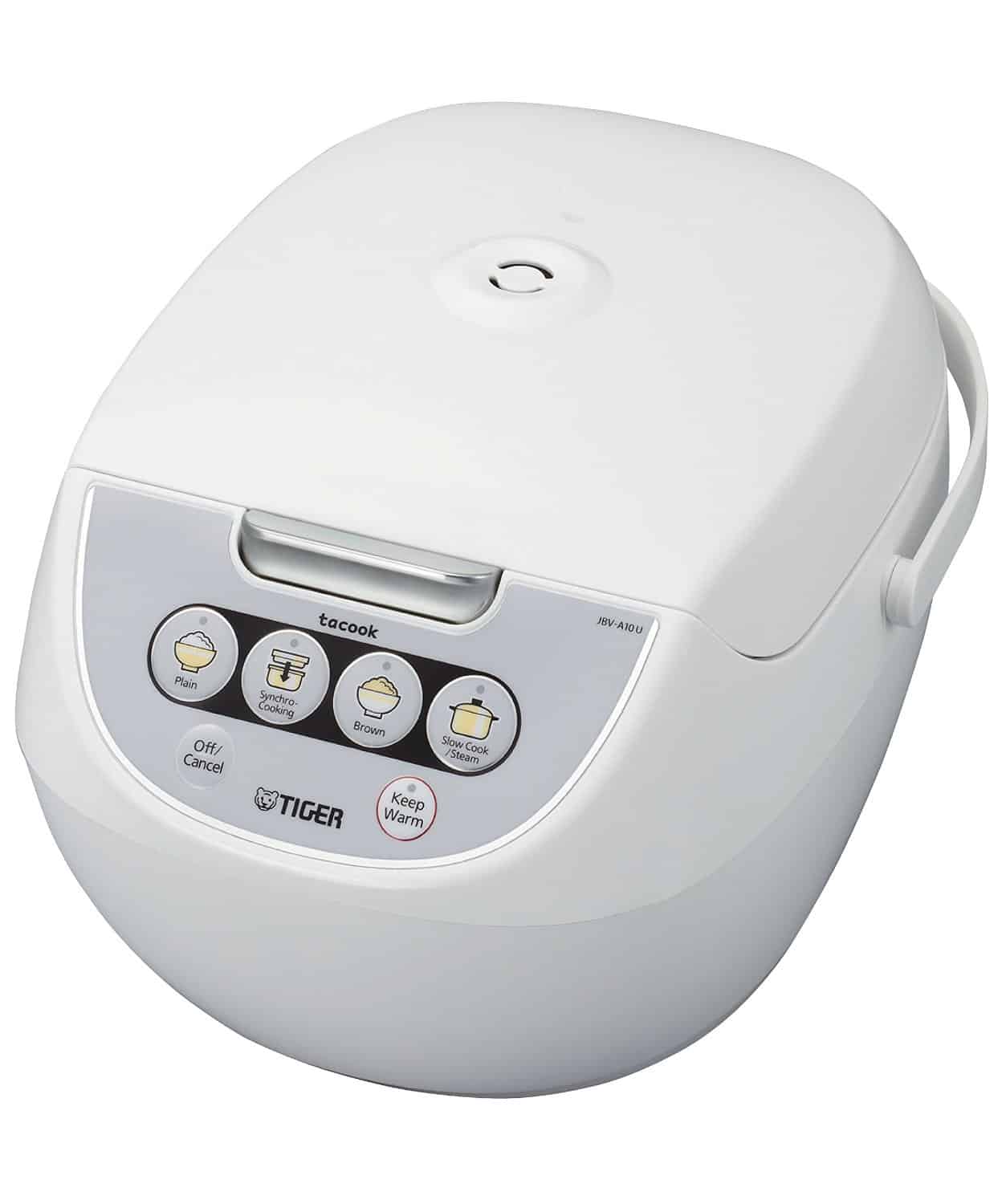 Tiger Corporation’s JBV-A10U-W is a multi-functional electric rice cooker that lets you prepare two dishes simultaneously with its “tacook” synchronized cooking function. In addition to the the unit itself, the rice cooker comes with a special cooking plate so that flavors don’t mix together. With a simple one-push menu (hello, buttons), cooking has never been more convenient.

All the accessories are dishwasher-safe.

The cooking functions include the following: 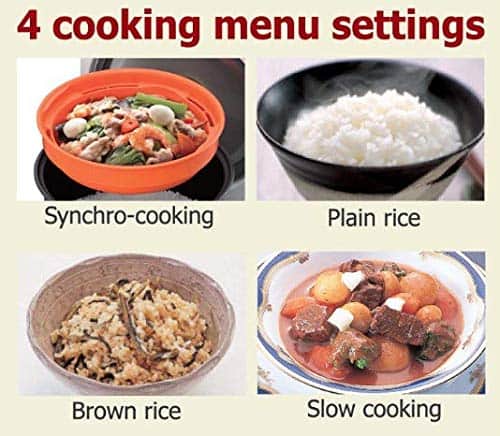 Learn more about the Tiger Rice Cooker JBV-A10U on Amazon

Simply put, the biggest selling point of the Tiger JBV-A is it that it lets you cook both rice and one main dish at the same time. All you have to do is press a button and the rice cooker will do everything for you. With its patented Automatic Cooking Logic™ system, the JBV-A10u-W monitors the temperature within the unit to ensure that both rice and dish are evenly cooked each and every time.

But let’s break down these features further.

Its “synchro-cooking” function allows you to cook your entire meal all in one go, using just one appliance. While it’s certainly not expected for rice cookers to have the ability to cook two dishes simultaneously, manufacturers have made it a point to include versatility and functionality in product development. One touch is all it takes to get dinner on the table. The Tiger 5.5-cup Micom rice cooker also comes with a BPA-free cooking plate to make sure that the rice remains unaffected by the food cooking on time.

But if you just want to cook rice, the Tiger JBV-A series can do that as well! Choose from “Plain”, “Brown”, or “Slow Cooker” aside from its “Synchro-Cooking” function. The “plain” button is meant for most grains, particularly white rice. “Brown” is designed for longer water absorption, also suited for other whole grains like black and red rice. Lastly, “Slow Cooker” allows you the freedom to cook some of your more exciting recipes.

The inner pot has a non-stick coating and is completely removable for easy washing. Just throw that with the rest of the accessories into the dishwasher to make cleanup a breeze.

Pros and Cons of the Tiger JBV-A10U Rice Cooker

Most people love this Tiger 5.5-cup Micom rice cooker and warmer because it makes good, fluffy rice every time. Surprisingly, the selling point of this unit — that you can cook a main dish with rice — doesn’t seem to be their reason for buying the unit in the first place. The machine is a solid, reliable rice cooker, and the fact that it can cook another dish as well seems to be an added bonus.

This Tiger Micom rice cooker does not have a long life-span, however, and after a year or two, will start to show its age. Some buttons are known to stop working after a time, and the inner cooking pot starts to have nicks and scratches even if you use a non-abrasive sponge.

Tiger has manufactured many viable rice cooker collections. Check out our other Tiger reviews to explore other units.

Where to Buy the Tiger JBV-A10U-W 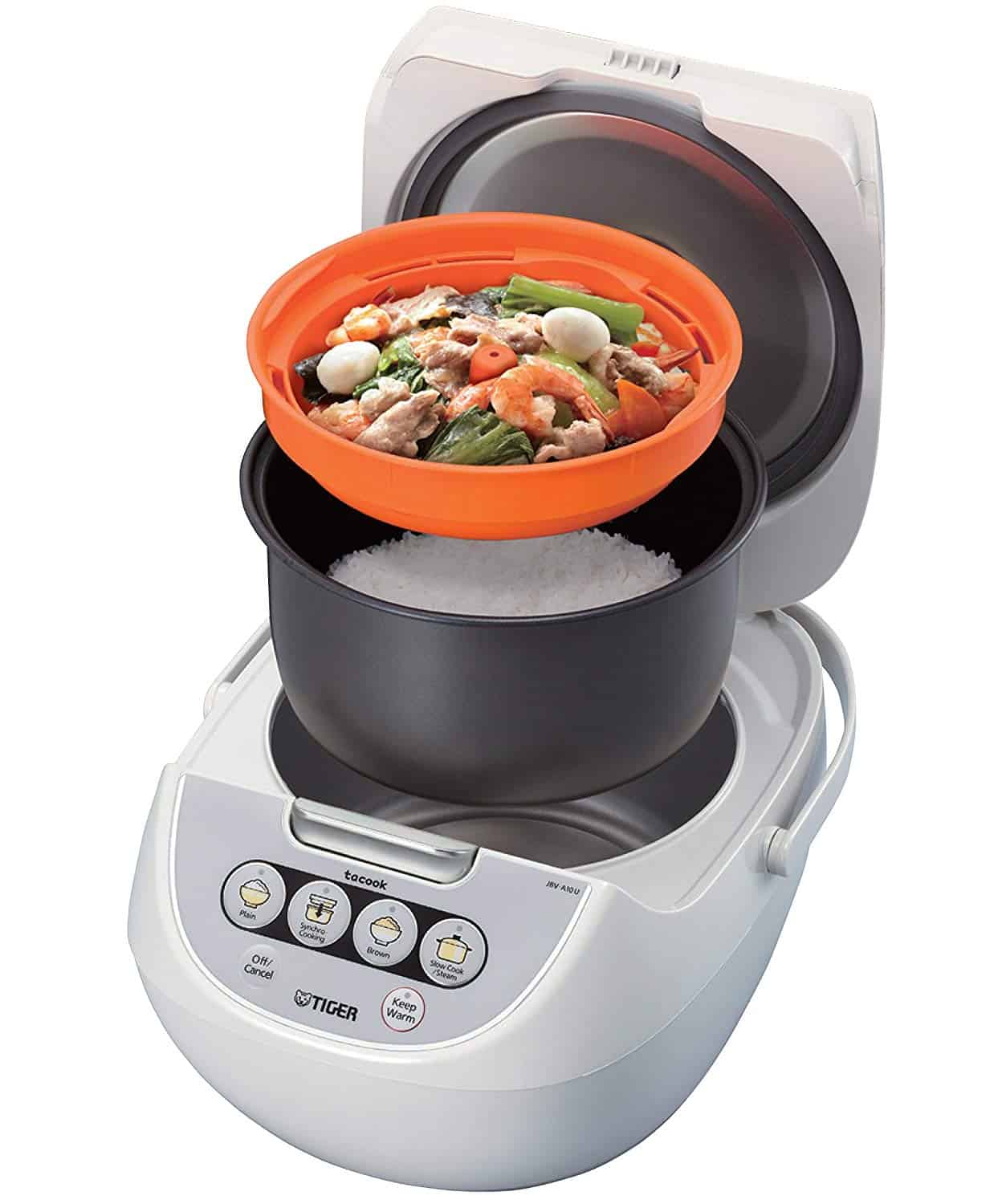 The JBV-A10U-W is part of the Best Sellers Rank, coming in at #20 in the Rice Cooker category. Head over to the product page to find the best deals on the unit. Do take note that this applies to both the 5.5-cup capacity and the 10-cup capacity. The product is also eligible for free shipping.

The Tiger JBV-A10U-W comes with a limited one-year warranty, subject to certain provisions found in the user manual.

The JBV-A10U-W a good rice cooker. Period. We love the fact that it can cook a main dish as well as rice, but really, that’s just icing on the cake. We love its push button menu (because we are lazy) but also caution users that these very same buttons may stop working after 12 months of solid work. The inner cooking pot may also start getting scratches after after 6 months. Overall though, this is a good rice cooker for its price.