Some people like cookers that have a lot of buttons and functions that enable them to have a wide range of options when it comes to cooking rice. For pro cookers, that might be a viable option so they can experiment with different cooking times, temperatures, and cooking modes.

But other people want a simpler approach to rice cooking. They would prefer a cooker that doesn’t have all the noise and confusing buttons. All they want is to cook rice quickly and easily. If this is your preference, then the Hamilton Beach 37508 Mini Rice Cooker and Food Steamer is for you.

This model is more compact and easier to navigate than its predecessor, the Hamilton Beach 37549 model, in an effort to offer a cooker to suit different people, whatever their preference.

About the Hamilton Beach 37508 Mini Rice Cooker and Food Steamer 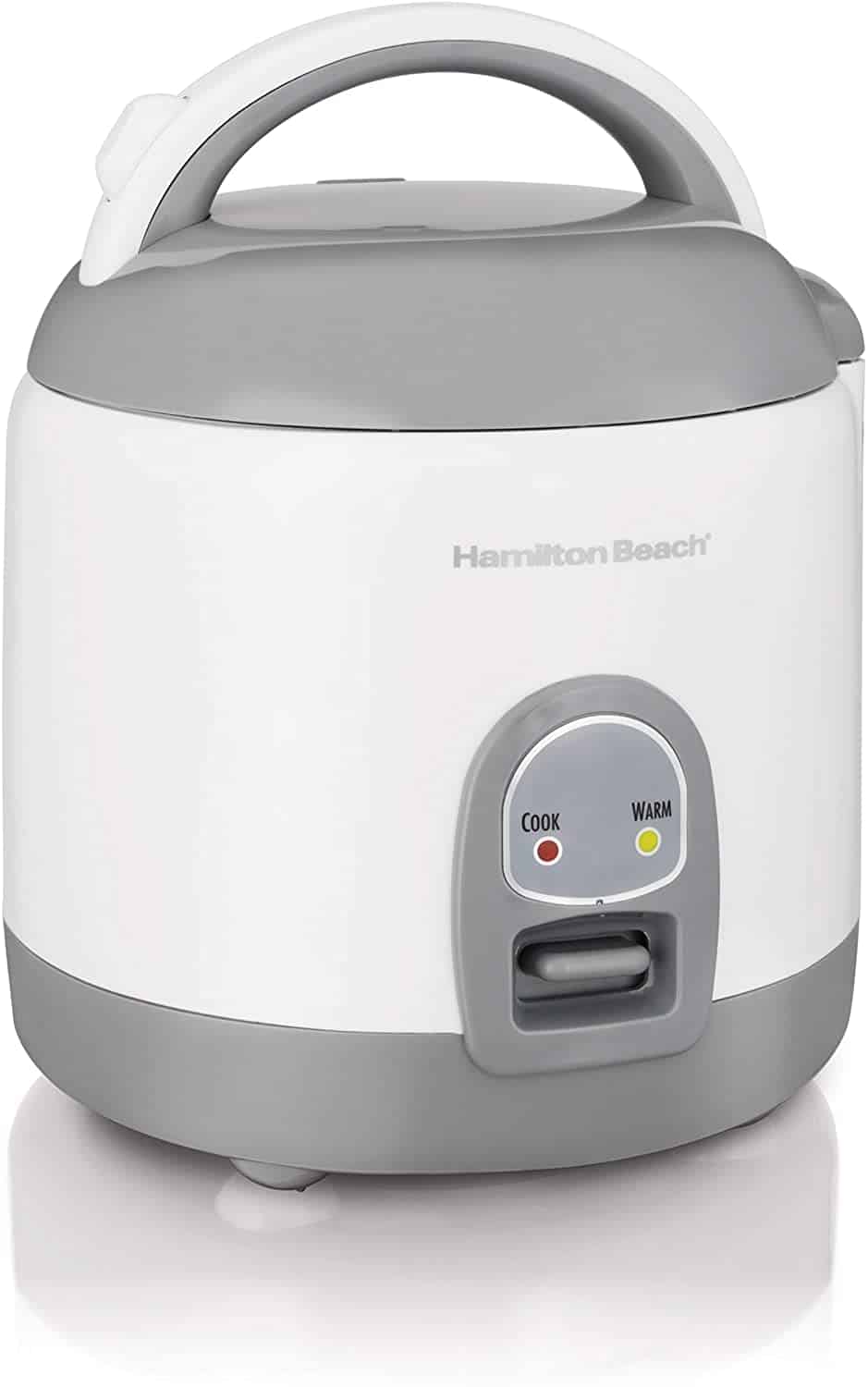 The best small Hamilton Beach rice cooker, the 37508, makes the rice cooking process a tremendously easy and simple task. All you have to do is pop the ingredients in the inner pot and flick the single switch!

Say goodbye to the hassle and difficulty of navigating through different cooking options and settings. This cooker is smart enough to know when your rice is fully cooked and automatically turns on the keep warm function to ensure your rice is in optimal serving temperature.

This 8 cup rice cooker has a large cooking capacity (4 cups uncooked, 8 cups cooked), making it possible to serve even an entire block or group of people in one simple cooking cycle. 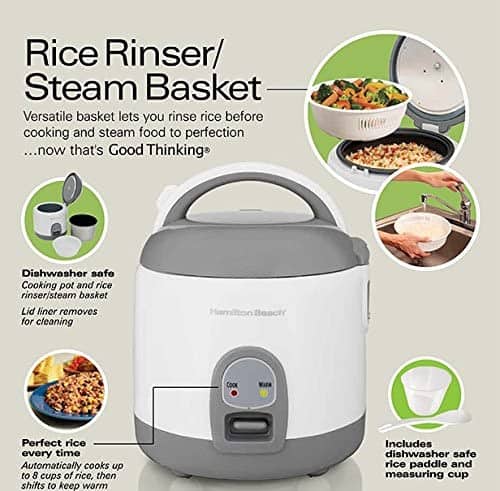 The problem with most rice cookers is that they don’t accommodate people who have busy schedules or those who want an easy and hassle-free way to cook their daily meals.

The Hamilton Beach 37508 Mini Rice Cooker solves that problem. It doesn’t only cook rice with a single flick of a switch, but it also doubles as a steamer. That means you can cook a complete meal simultaneously in one cycle! The cooker comes with a steam basket where you can pop in vegetables, fish, or meat and steam it to perfection while your rice is cooking underneath.

Rinser, Steamer, Cooker all in one

The Hamilton Beach 37508 Mini Rice Cooker and Food Steamer might be simple to navigate. But that doesn’t mean it has nothing else to offer aside from cooking rice.

In fact, the cooker comes with a steam basket where you can place your viand, whether it be veggies, meat, or fish. The steam basket is positioned over the inner pot, allowing for simultaneous rice cooking and food steaming all in one cycle!

And as if that’s not enough, the steamer also doubles as a rice washer you can use to rinse your grains! Cleaning the rice grains before starting the cooking cycle is important to get rid of impurities and dirt. Doing this beforehand will ensure that you yield clean and tasty rice every time. Read more about the importance of washing your rice grains here.

The entire rice cooker only has one single switch. To begin the cooking process, all you need to do is push the switch down until the LED light indicates that the cooker is beginning to cook the rice. After the cycle, the switch will automatically flick up to begin the keep warm function.

Unlike other complicated rice cookers, the Hamilton Beach 37508 is incredibly easy to navigate and use, making it the ideal choice for busy individuals or those who just want to cook their daily meals with ease.

But don’t underestimate its size! This rice cooker has a capacity of 8 cups of cooked rice, enough to serve a big group of people. With its small build but big capacity, you can take it to parties, picnics, or camping!

Cooks a Variety of Grains

Whatever type of rice you eat, the Hamilton Beach Mini Rice Cooker can cook it. White rice is not the limit. In fact, you can go for brown rice, sorghum, barley, quinoa, buckwheat, and more! All these types of grains can be cooked to perfection with the 37508 cooker.

Pros and Cons of the Hamilton Beach Mini Rice Cooker

The Hamilton Beach 37508 Mini Rice Cooker and Food Steamer appeals most to busy individuals and those who don’t like navigating through complicated functions and features to cook their meals. The fact that you can prepare a complete breakfast, lunch, and dinner by just tossing in the ingredients and flicking a switch is an ultimate selling point for the 37508 cooker.

“This is a rice cooker that takes up as little space as possible, while also having the same functions as the larger models.”

Simple, small, yet packed with the functions of a conventional rice cooker. That’s what makes this Hamilton Beach 37508 model a bang for the buck. It makes the cooking process so much easier but doesn’t fall short in yielding great-tasting rice. 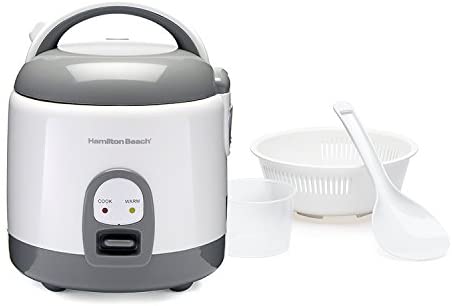 A really small amount of money will get you this cooker that allows a seamless and stress-free cooking experience. The Hamilton Beach 37508 Mini Rice Cooker ranks at a high place of #20 in the Rice Cookers category. Check the best prices on Amazon today.

If you’re looking for other Hamilton Beach options, consider the 37518 8-cup rice cooker.