We don’t know about you, but we’ve never seen a rice cooker that looks as classy and sophisticated like this one. This Oster rice cooker is perfect for small kitchens and single-family households. It’s a sleek appliance to display on your countertop and will help you prepare your home-cooked meals as easily as possible.

At first glance, this small rice cooker looks like a color black version of the Oster 6 Cup Rice Cooker and Steamer 4722. For starters, they do have the same capacity and design. But you can consider the Oster DuraCeramic Rice Cooker as a new and improved version of its predecessor. You’ll find out why as we look deeper into its functions and features.

About the Oster DuraCeramic Rice Cooker 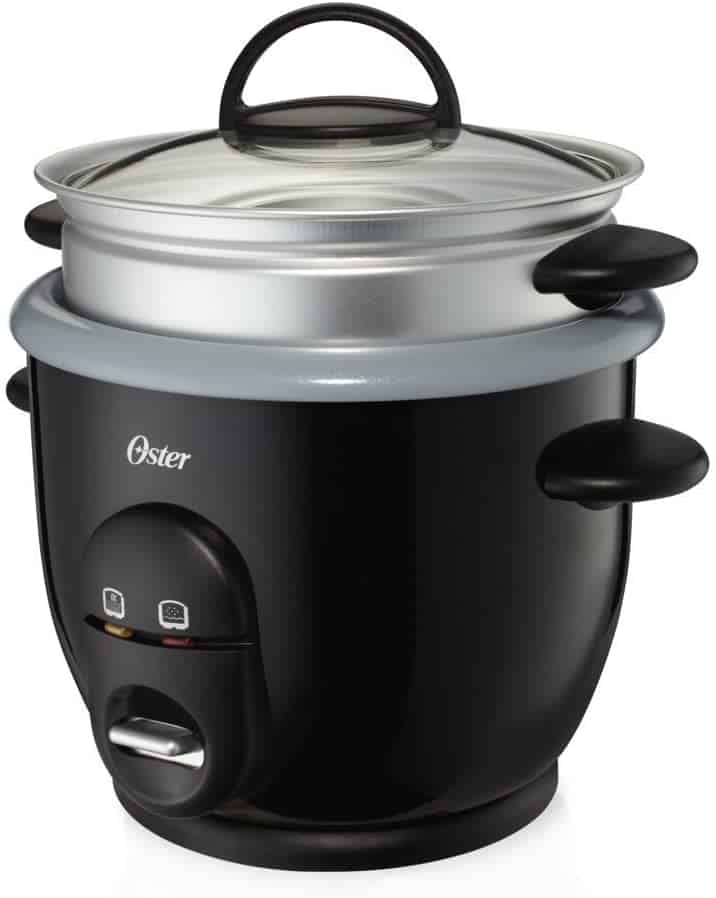 The fact that this 6 cup rice cooker from Oster is elegantly designed is already a reason to want it in our kitchen countertop. But there’s more beyond what meets the eye. 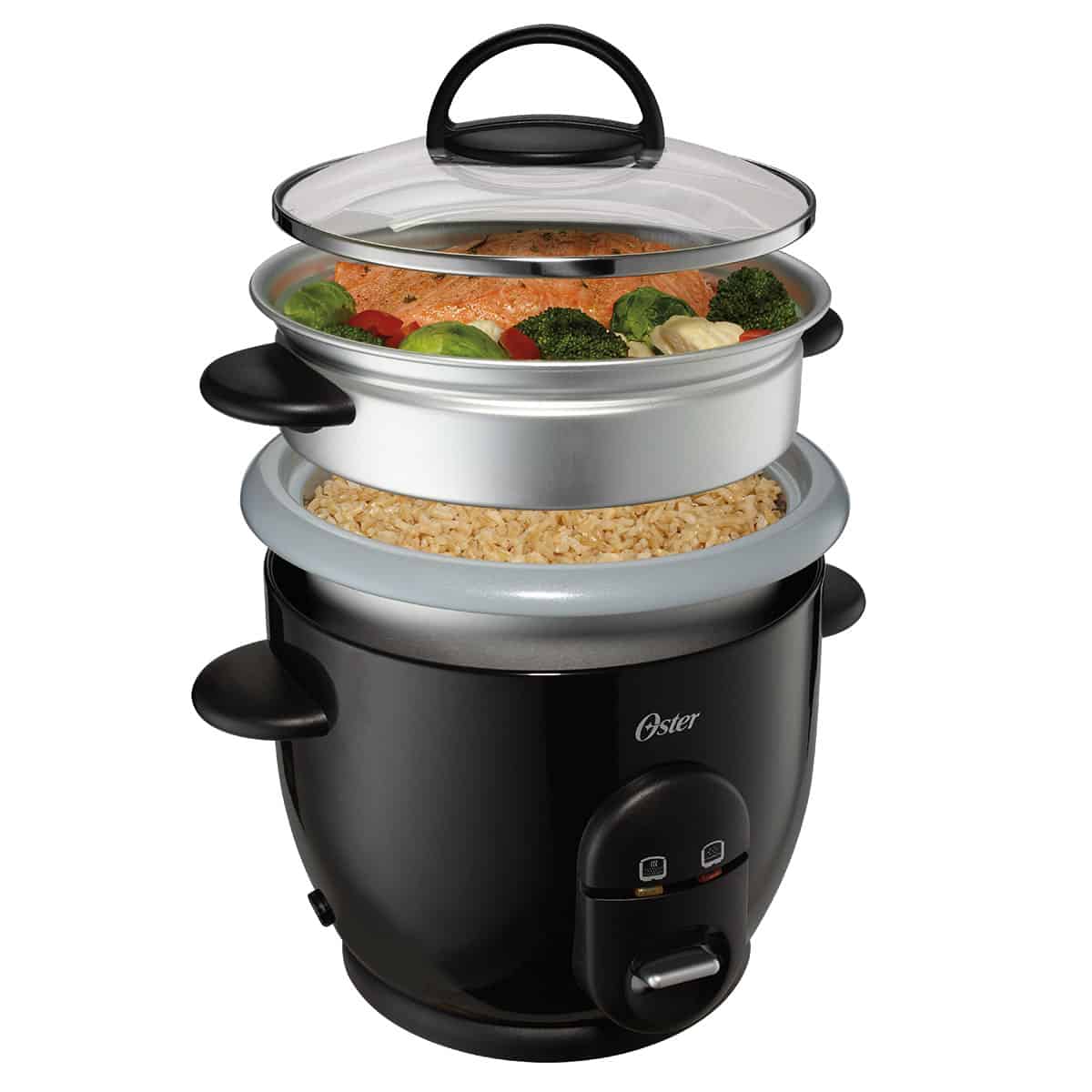 More than just an appliance that cooks rice, the Oster DuraCeramic cooker has a bunch of other features in its arsenal.

From the cooker’s name itself, you immediately know that there’s something special about it. Unlike conventional rice cookers, this one is made with DuraCeramic Titanium Infused Non-Stick Ceramic Coating. This feature makes it more durable and functional compared to other cookers.

The Oster Ceramic Rice Cooker can lasts 8 times longer and cooks up to 30% faster than other models. This ensures the durability of your kitchen appliance, making it a worthy investment. Not only that, but the sped up cooking function saves you a lot of time and energy.

This Oster Multi Use Rice Cooker comes with an external steam tray. In this, you can place your veggies, meat, fish, etc. and cook it simultaneously with your rice grains. In one cooking cycle, you can yield an entire meal with up to 6 cups of rice. And if you’re not up for a heavy dinner, you can also cook soup, stew, oatmeal, and more in the DuraCeramic pot.

This Oster Rice Cooker and Steamer makes the cooking process so much easier. It eliminates the need to navigate through several buttons and settings to begin the cooking cycle. All you have to do is push down a single switch to start. The appliance will automatically begin the keep warm function once the cooking cycle ends to ensure optimal serving temperature.

You don’t really need any complicated indicator lights to tell you about the progress of your cooking. The Oster DuraCeramic Cooker is designed with a tempered glass lid that allows you to simply peek in and monitor your food as it cooks.

Pros and Cons of the Oster DuraCeramic

From the exterior design all the way to internal functions and features, the Oster DuraCeramic Cooker is definitely perfect for those looking to cook quick yet healthy meals (and those who want to have an elegant appliance in their kitchen).

“The Oster DuraCeramic Rice Cooker is a simple, electric rice cooker that is easy to operate. It’s made of better materials than most other small rice cookers.” 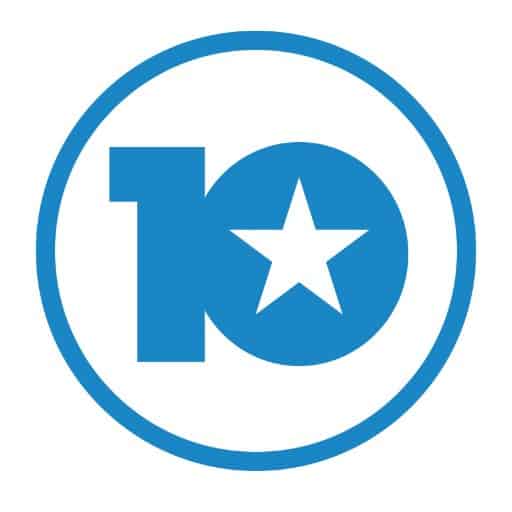 The Oster DuraCeramic Rice Cooker may be small. But in this tiny package is housed a ton of desirable features you don’t get in any other model. That’s what makes the DuraCeramic a bang for the buck and definitely a great addition to your kitchen.

Where to Buy the Oster DuraCeramic Rice Cooker 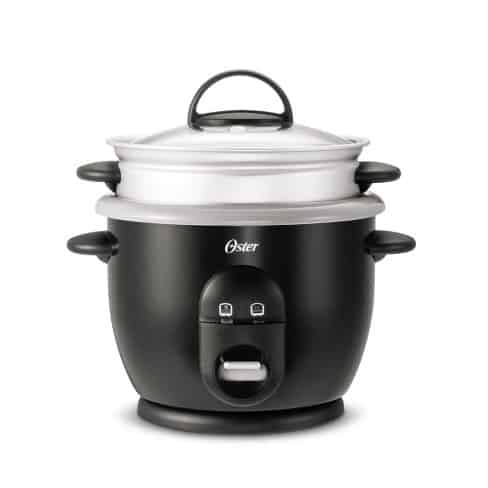 For a small rice cooker, the Oster DuraCeramic model is packed with a punch. It ranks at #59 in the Rice Cookers Category on Amazon.

The Oster DuraCeramic Rice Cooker looks simple at first glance. But beyond that sleek exterior is housed a ton of wonderful features that make the cooking process much easier and more enjoyable. Coated with DuraCeramic Titanium Infused material, it lasts 8 times longer and can cook rice and your veggies or meat 30% faster than other conventional cookers.