Although quite expensive, the CRP-GHSR1009F can be considered as an ideal choice of rice cooker to add a highly functional and modernized touch to your kitchen and cooking experience.

Mothers and cooking enthusiasts would tell you that they spend most of their time in the kitchen. So why not give it a luxurious and sophisticated touch? Backed by its classic design and modern technology, the Cuckoo CRP-GHSR1009F Rice Cooker is the perfect choice to modernize both your kitchen and your cooking.

If you’re interested to know more about this induction heating pressure rice cooker, you’ve come to the right place. This review will give you all the valuable insights and sophisticated features of the best overall Cuckoo rice cooker, the CRP-GHSR1009F.

About the Cuckoo CRP-GHSR1009F Rice Cooker 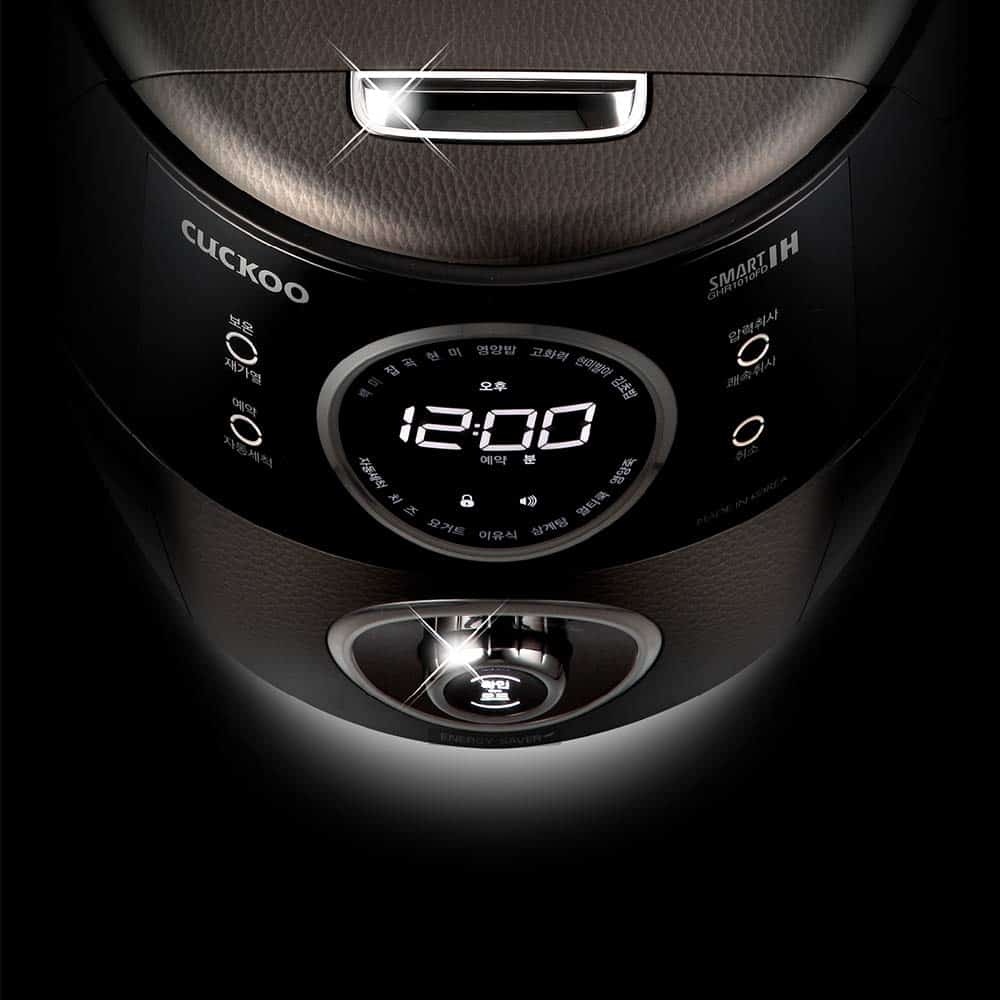 Its beautiful and elegant design already makes this rice cooker intriguing, made with Cuckoo’s full stainless 3.0 Eco Classico material and covered with luxurious leatherette. But the CRP-GHSR1009F offers more than just a sleek exterior.

On top of that, it’s got an impressive line-up of functions and features that will completely revamp the conventional rice cooking process. The CRP-GHSR1009F features Fuzzy Logic and Intelligent Cooking algorithm, enabling you to experience exceptional Cuckoo cooking like never before. 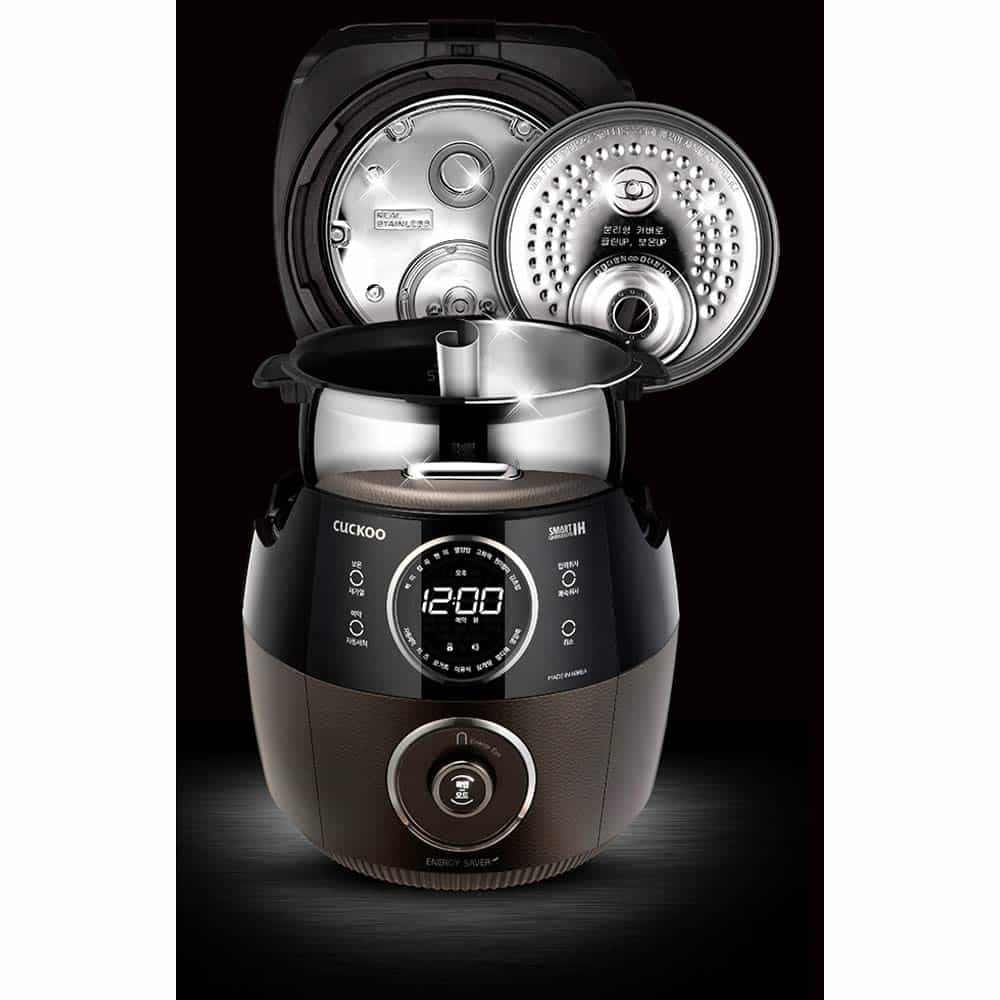 Fuzzy Logic and Intelligent Cooking Technology makes the CRP-GHSR1009F the perfect cooking companion. It boasts of high-tech and sophisticated functions, including energy-saving features offered only by Cuckoo.

With a Light Touch Dial Knob and 3-language Voice Control Navigation (English, Chinese, and Korean), you have an expert kitchen assistant while having more control over the quality and taste of your rice.

In its CRP-GHSR1009F Rice Cooker model, Cuckoo Electronics incorporated its iconic Smart Wheel Control feature. It only takes a simple turn of a wheel to navigate through the various menu settings offered and one push to select your preferred option.

And if that doesn’t sound convenient enough for you, you can opt to access the high-tech Voice Control Navigation, which can respond to English, Chinese, or Korean languages.

The CRP-GHSR1009F takes pressure cooking on a whole new level, adding an advanced pressure cooking option. The 2 ATM (atmospheric) pressure cooking feature deposits twice as much latent heat to the rice during the cooking cycle. This function, coupled with the curved inner pot, ensures that the rice is evenly and thoroughly cooked while retaining its great, natural taste.

With a pressure rice cooker, you can prepare healthy, delicious rice, make fermented yogurt and cheese, and even pressure cook meat.

The Cuckoo CRP-GHSR1009F Rice Cooker eliminates the difficulty of maintaining the cleanliness and sanitization of cooking appliances. With its automatic steam cleaning feature, you can rest secure that your rice cooker is clean and sterilized at all times.

This unit also comes with a high-quality stainless steel exterior and a non-stick coated inner pot for easy cleaning.

Of all the luxurious, high-functioning rice cookers in the market, Cuckoo is the only manufacturer that incorporated energy-saving features in its appliances.

As standardized in all Eco series induction heating pressure rice cookers manufactured by Cuckoo, The CRP-GHSR1009F is equipped with an Energy Saver Switch. You can save energy by turning on the standby mode through a simple mechanical on/off power switch.

You won’t find another rice cooker as beautiful and elegant as the Cuckoo CRP-GHSR1009F. This classic, sleek exterior incorporates a full stainless 3.0 Eco Classico design with a luxurious leatherette covering the top and bottom portions of the cooker.

It’s the perfect rice cooker if you’re after a more modernized and sophisticated approach to your kitchen and cooking process.

Pros and Cons of the Cuckoo CRP-GHSR1009F

Designed with a sleek and sophisticated titan silver exterior, the CRP-GHSR1009F is easily an appliance you want to have in your kitchen. But what makes it more worth your investment are its functions and features that incorporate modern, advanced technology.

“One of the things that I like the most about this company is that their products are very cool looking. Most of the pressure rice cooker models that they offer have a unique style to them, so you can pick your model based on look if that’s important to you. They are very functional as well, and one of the most popular brands of pressure rice cookers, so you can’t go wrong with whichever set of features you go with.”

Rick
Reviewer at Food For Net

It’s safe to admit that the CRP-GHSR1009 model is a little pricey. But you also have to consider that this model is Cuckoo’s first-ever luxurious 10-cup induction heating rice cooker with a Light Touch Dial Knob Navigation Panel. For a first, Cuckoo did a good job in terms of design and functionality, making this unit worth the investment.

But if you’re looking for a cheaper option that comes with the impressive features offered by Cuckoo, check out our review of their CRP-P0609S model.

Where to Buy the Cuckoo CRP-GHSR1009F Rice Cooker 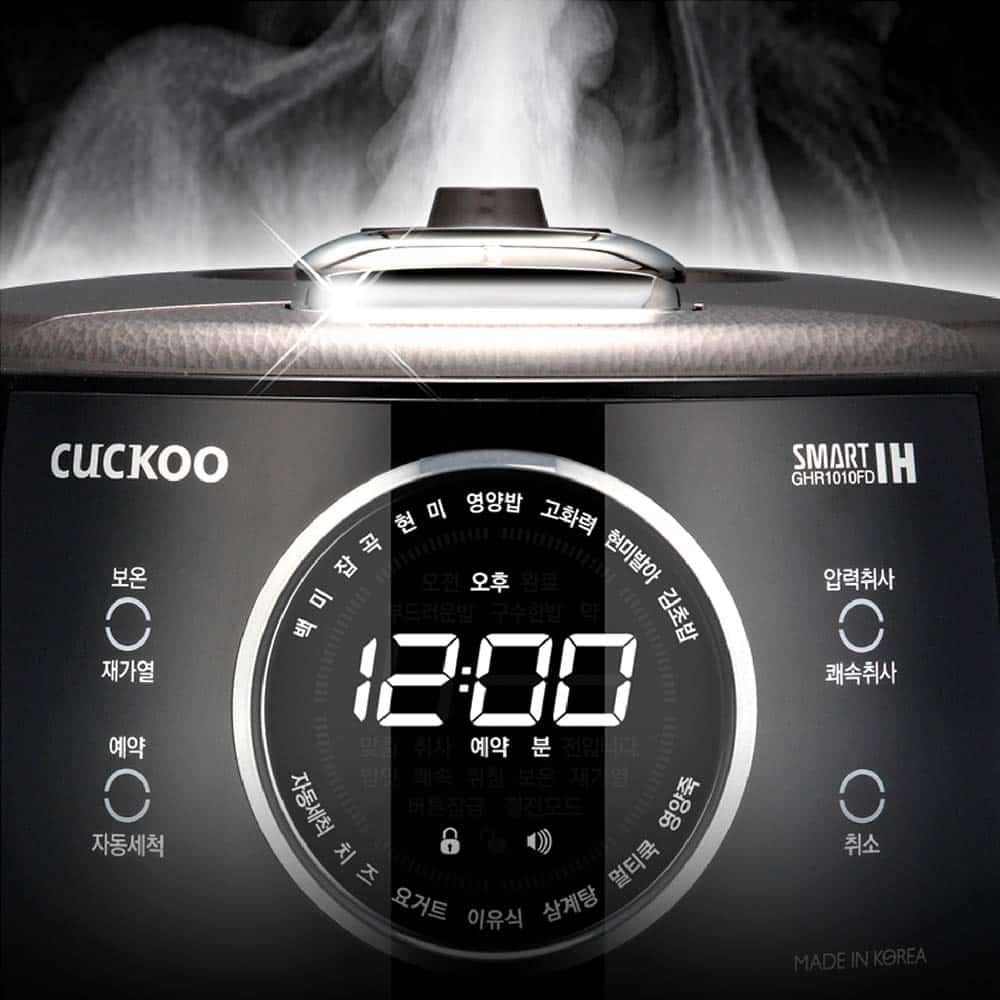 The Cuckoo CRP-GHSR1009F gets you interested at first glance. But upon learning of its modern tech features, you’ll absolutely fall in love with the unit. That’s why it deserves a place in the line up of reviews of the best Cuckoo rice cookers. In fact, Amazon has given it a place in two categories in Amazon’s Best Sellers Rank, coming in at #256 in the Rice Cookers Category, and #181,144 in Kitchen and Dining. You can find the best deals here.

Cuckoo provides a 1 year parts and labor warranty for their appliances. If you purchase the product on Amazon, you can conveniently request a manufacturer’s warranty or a free Amazon tech support service to help you troubleshoot issues on your rice cooker.

Although quite expensive, the CRP-GHSR1009F can be considered as an ideal choice of rice cooker to add a highly functional and modernized touch to your kitchen and cooking experience.