Common Rice Cooker Problems and How to Fix Them

You have probably been using a rice cooker to cook white rice or brown rice for months now. It’s efficient and easy to use, that’s why you use your electric rice cooker for almost every meal. However, your unit decided to break just as you were boiling some rice in its cooking pot. What now?

A rice cooker can malfunction despite its quality — and whether the fault lies in the cooker or in the way you use it, the fact remains that it’s troublesome to have to find a replacement.

If you really need your rice and you don’t have the extra cash to have your unit professionally fixed, then don’t fret. Most rice cooker issues are simple enough to fix that you can do it yourself. Below are the common rice cooker problems and how to fix them.

Why Does My Rice Cooker Not Work? 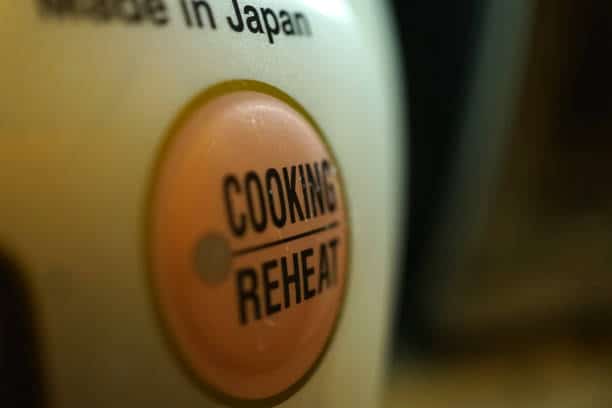 There are plenty of reasons why your electric rice cooker has problems; either the unit itself malfunctioned, like power cord issues, or you’re simply not utilizing it properly, like not following the set capacity to cook rice. It can also be due to your cooker’s age and build quality.

Whatever the issue is, it’s important to identify what is causing the problem to see if you can troubleshoot it yourself or if you’ll need to call in some help.

Before we dive into the issues that rice cookers commonly have, listed below are the common causes of why your unit may have these malfunctions.

1. Not Reading The Manual

Every rice cooker unit comes with an owner’s manual with every purchase. This manual contains all the operation instructions you need about your rice cooker, including the features, the set capacity, and functions that it may have that other cookers don’t.

The majority of malfunctions stem from not reading the manual carefully or not reading it at all. While some cookers are quite straightforward to use, other more advanced manuals require a bit more instruction to use.

Like all kitchen appliances and electronics, a rice cooker needs to be properly maintained so it doesn’t break down faster. Improper cleaning often leads to issues that can make it harder for your unit to cook food. If not properly cleaned, the heating element could have calcium build-up that prevents heat from being evenly distributed during the cooking cycle.

Sometimes leftover burnt rice in the inner pot isn’t properly cleaned and the rice sticking within the interior can harbor bacteria that spoil food faster.

If you’ve bought your electric rice cooker for a cheap price or you’ve purchased a used unit, there’s a high chance it’ll break down faster. More expensive units are typically built and tested to ensure you’ll be able to use them long-term, hence their price.

Japanese rice cookers, like Zojirushi, are an excellent example. In this case, it might be best to invest in quality rice cookers than to spend endless hours or money fixing your unit. 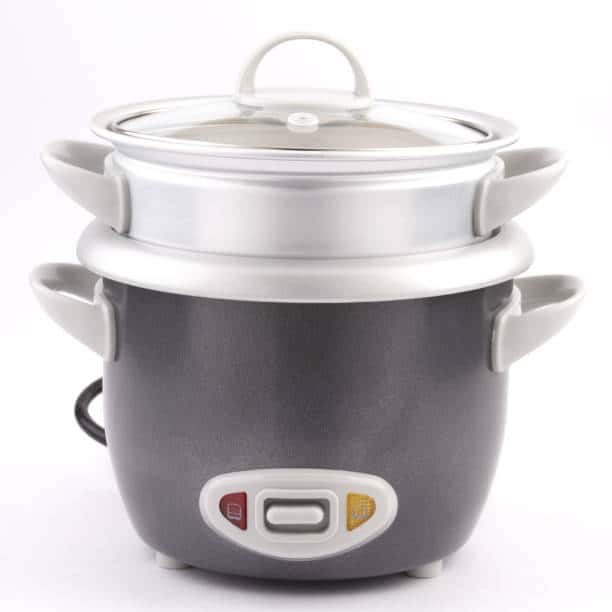 A rice cooker, like any other device, can break, but that doesn’t mean you should starve or skip eating rice altogether for the rest of the day just because you couldn’t make rice.

If your cooker doesn’t respond when it’s plugged in, e.g. the keep warm function isn’t turning on, check for the following:

A thermal cutoff feature is included in modern cookers to safeguard them from overcurrent and overheating. If the temperature rises over the setpoint or if there are any power changes, the cooker will shut off.

Fixing the fuse is a nuisance since it isn’t simple and necessitates the use of a variety of professional instruments, including multimeters, pliers, screw diver, and solder.

If you’re not sure how to fix a fuse, though, you should see an electrician. However, if you’re confident enough in your own skills, follow the steps below:

Sometimes the reason your rice cooker doesn’t work is because of faulty circuits. Try opening up your unit and see if the loose wiring and circuitry might be the cause. If there are loose cables:

While some minor issues, such as loose cables, can be resolved on your own, burned or cut wires may need the assistance of a professional or expert.

If the interior is dirty, use a contact cleaner to clean the wires and cables.

Sometimes the problem lies in the cord itself. The power cord’s primary duty is to be the power source of the main cooking unit and the unit itself won’t turn on if the cable isn’t working. Check if your cord is functioning well.

Examine the cable for any signs of damage. Bends in the wire might cause it to break down. Check for frays or cuts, and if you find any, replace the wire with a new one to fix the rice cooker.

Rice cookers, like everything else, have a set lifespan. If the cooker is old and you’ve been using it for years, chances are it’ll break down at some point. The only realistic option is to get a new rice cooker.

Make sure to read several best rice cooker reviews to obtain a variety of suggestions for your purchase.

How Do I Troubleshoot My Rice Cooker? 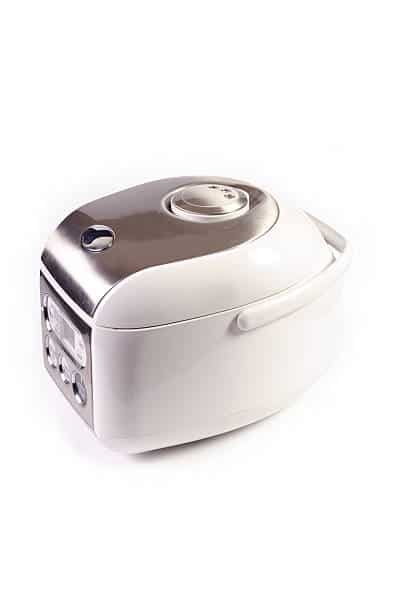 The things you can fix depend on your unit, your expertise, and the issues at hand. If you’re a complete beginner at troubleshooting rice cookers, it’s best to pass the task to someone more knowledgeable, preferably a professional. However, if you want to tinker or are looking to expand your handiness, then do the following:

You must inspect the gasket properly if your unit’s experiencing steam leaking issues. To resolve this, remove the gasket and see if it’s in good shape. After that, make sure the rim is clean and free of food stains or fractures. Cold water should be used to clean the gasket before you replace it in the proper position.

The gasket loses its efficiency and functionality over time. As a consequence, you don’t receive the high-quality rice that you want. Keep an eye on the gasket and pressure valves at all times. If you discover any damage, replace it as soon as possible.

Is your rice still isn’t finished cooking even when using a rice cooker? There are plenty of reasons why your unit is taking longer to have your rice ready, such as:

To avoid this, take great care of the unit’s cleanliness. Measure rice or food before putting them in the cooker so it’s in line with the set capacity. If the wire is the problem, it needs to be immediately replaced.

Vapors and Excess Water Dripping From the Rim

Are you a first-time rice cooker user? If that’s the case, you’re probably terrified when you see water trickling from the rim. Don’t fret! That isn’t a major issue.

However, this may lead to another rice cooker issue, which is vapor accumulating around the rim. Simply clean the valves and vent pipes to eliminate the problem.

This is usually caused by the rice cooker’s internal pressure. The release is so low that it’s hard to open the lid. To fix this, pour cold water on top of the lid to relieve the extra pressure. You can also remove the pressure valve if the lid is stuck. This will allow the pressure to escape, and the lid will gradually release.

If the display is showing all zeros or isn’t showing the normal settings, the issue might lie with the lithium battery. To solve this, simply open the  battery compartment of your unit, remove the old battery and replace it with a new one. 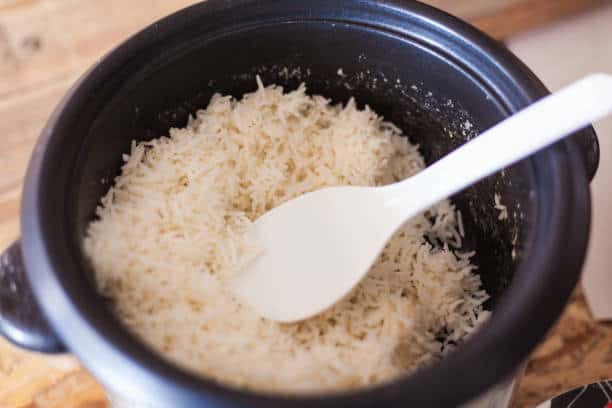 Sometimes the problem lies with how you use the cooker and not the cooker itself. Here are some common rice cooking problems.

Why Does My Rice Cooker Make a Mess?

When you cook starchy rice in a rice cooker, it begins to produce bubbles. The rice cooker’s boiling water reacts with the starch in the rice to create these frothy bubbles. When the bubbles reach the top of the rice cooker, they burst. This is quite normal, and there is no need to be concerned.

Make sure you’re using the appropriate quantity of water for the amount of rice you’re cooking to keep your rice cooker from boiling over. If it doesn’t work, check to see if you’re pre-rinsing your rice thoroughly enough. You may also use a different variety of rice or add some oil.

How Do You Fix Undercooked Rice in a Rice Cooker?

Is your unit already in warm mode and the rice is still uncooked? Eating uncooked rice may be an unpleasant experience. It’s difficult to chew and has a bad flavor.

To fix this, put about half a cup of hot water as you cook rice, fluff the grains with a fork, close the lid and continue to cook until the rice cooked. When cooking rice, always use proper rice to water ratios and securely cover the lid. Also, remember that if you use too much water, you’re left with mushy rice.

One of the best ways to avoid the majority of the issues above is to properly clean your unit after every meal. Read through the owner’s manual, take care of your inner pot’s nonstick coating, and always ensure that the gasket is working properly so the pressure escape issue doesn’t happen.

If there are too many problems with your cooker and fixing it isn’t worth the effort anymore, it might be time to say goodbye to that rice cooker and find a better model.

Luckily, there are plenty of options in the market that can fit your rice cooker needs.

How to Use a Zojirushi Rice Cooker
Hui Yin September 17, 2021

The Best Cheap Rice Cookers for 2022

The Best Small Rice Cookers for 2022

How to Use a Zojirushi Rice Cooker

How to Repair Electric Rice Cooker